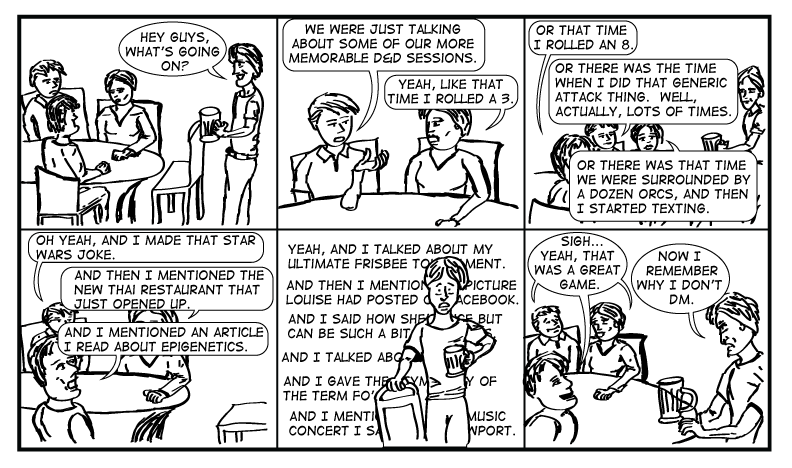 I was talking to a friend the other day and got on the topic of Dungeons and Dragons, and group dynamics and stuff like that. Then this idea kind of came out of it. While this cartoon is an exaggeration, we do get off track easily. So this musing was pondering what if those were the most memorable parts of a game.

I suppose I should say that the last line is just a throwaway joke. I haven't actually been a DM, but it's more my inexperience with the game. But I needed some extra punchline.

On the technical front, I drew a quick thumbnail sketch to figure out the basic blocking and dialog flow, and then drew a quick six panel sketch (both in Photoshop). Then I took that, imported the image and wrote the dialog in Illustrator. I then went back to Photoshop, added more detail to the images, then went back to Illustrator and "inked" the image by drawing over the origial sketch. I shrunk it to fit the "artboard" before inking, which was the wrong order. I should only shrink things after I've inked it. Oh well, maybe next time. Then I added the speech balloons. I did some adjustment to the dialog, and added a white background to the character in panel 5 and put that dialog in a separate layer behind the ink layer and the one with the white cutout, so the dialog that was behind the guy would be blocked out. This entire project took maybe 3 hours ish. Not bad.

I wanted to draw something I wouldn't color, so it stands, or falls, on its own merit. In particular, I wanted the characters to be recognizable by their lines, as opposed to by the color of their clothes, skin, chairs, or other cues (or cheats). I also knew there was going to be a lot of dialog that would obscure a lot of the drawings, so things would have to be recognizable even when a lot of the image would be obscurred. This actually made me try to keep things simple. I only used two "camera angles" with the one character standing for all but the final frame, and the chair and beer mug being the only extras associated with him. One has her arm on the table the entire time. At one point, I had a glass in front of her, but it felt like it would be extra lines that just cluttered things up, so I didn't include it in the "inking" stage. I think it generally works in terms of keeping things simple yet recognizable.

And finally, for the curious, some of the comments are obscurred in the 5th panel. The 4th comment says he talked about "sailing". The 5th comment mentiones the etymology of "fo'c'sle" (a nautical term). And the 6th comment mentions seeing a "folk music concert", which might be a likely digression from something that sort of sounds like "folk", "at the Newport", which was a real concert place in Columbus I never attended, and also has a nautical feel to the name, though I didn't think about that until right now.