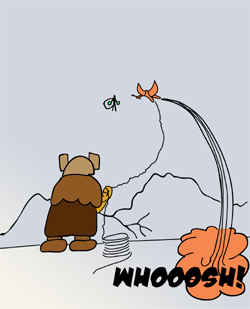 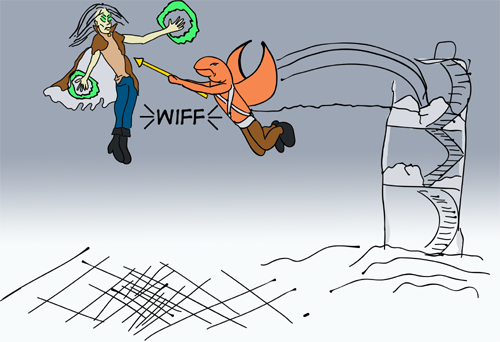 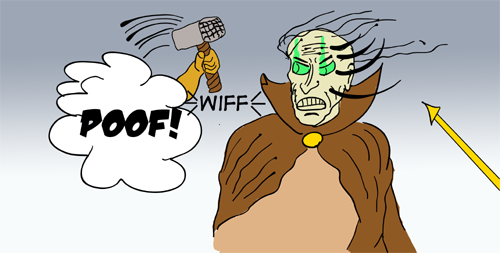 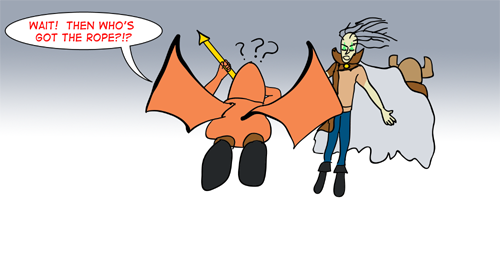 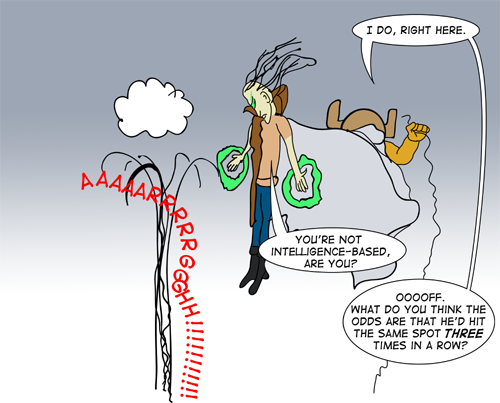 More or less, this exact thing transpired in a recent Dungeons and Dragons game. A bad guy was floating out of reach, 50 feet up in the air, beyond the ruins of a building. One character had wings and could "fly" but it's more like glide; he can't stay in the air once his turn is done. Another character had a 100 foot rope, and so they figured the rope could save the character from plunging down. I should note that the previous week he did, indeed, plunge down nearly terminating that character.

And yes, later on, the character tried to grap the bad guy again, and wound up plunging down a third time. The Dungeon Master decided to "be nice" and say that he did not hit the same spot each time, otherwise the crater he would have created would have meant he fell further and took more damage for falling the extra distance.

Oh, and just to be thorough, the bad guy is a Lich (not a super high level version), the guy with wings is a Dragonborn, and the unseen guy with the helmet is a Dwarf.

I decided to cheat and hide the dwarf as much as possible, so it's less for me to draw.

Another experiement in how fast I can do something. The pencil sketches were VERY rough. How rough were they you ask? This rough (page 1, page 2, page 3). I had to crank up the contrast on the third one to be able to see the scan in the inking phase. I scanned them in and used Illustrator to ink it using a WACOM pen tablet with varying degrees of success. I colored it in Photoshop, experimenting with layer masks and things like that. Rather than having 1 layer for colors, I created a new layer for each color. Had to redo it for each frame, but in the end it was pretty fast and seemed to be pretty easy to use. The whole process was less than a day, which is probably a land-speed record for me to make a 6-panel cartoon with color, speech balloons, and sound effects. The "text along a path" in Illustrator is exactly what I was looking for for the Charlie Brown-like "arrrrrrrrrgggghh!!!"

I want to shade it, but I don't have time right now. Hopefully soon-ish, maybe.