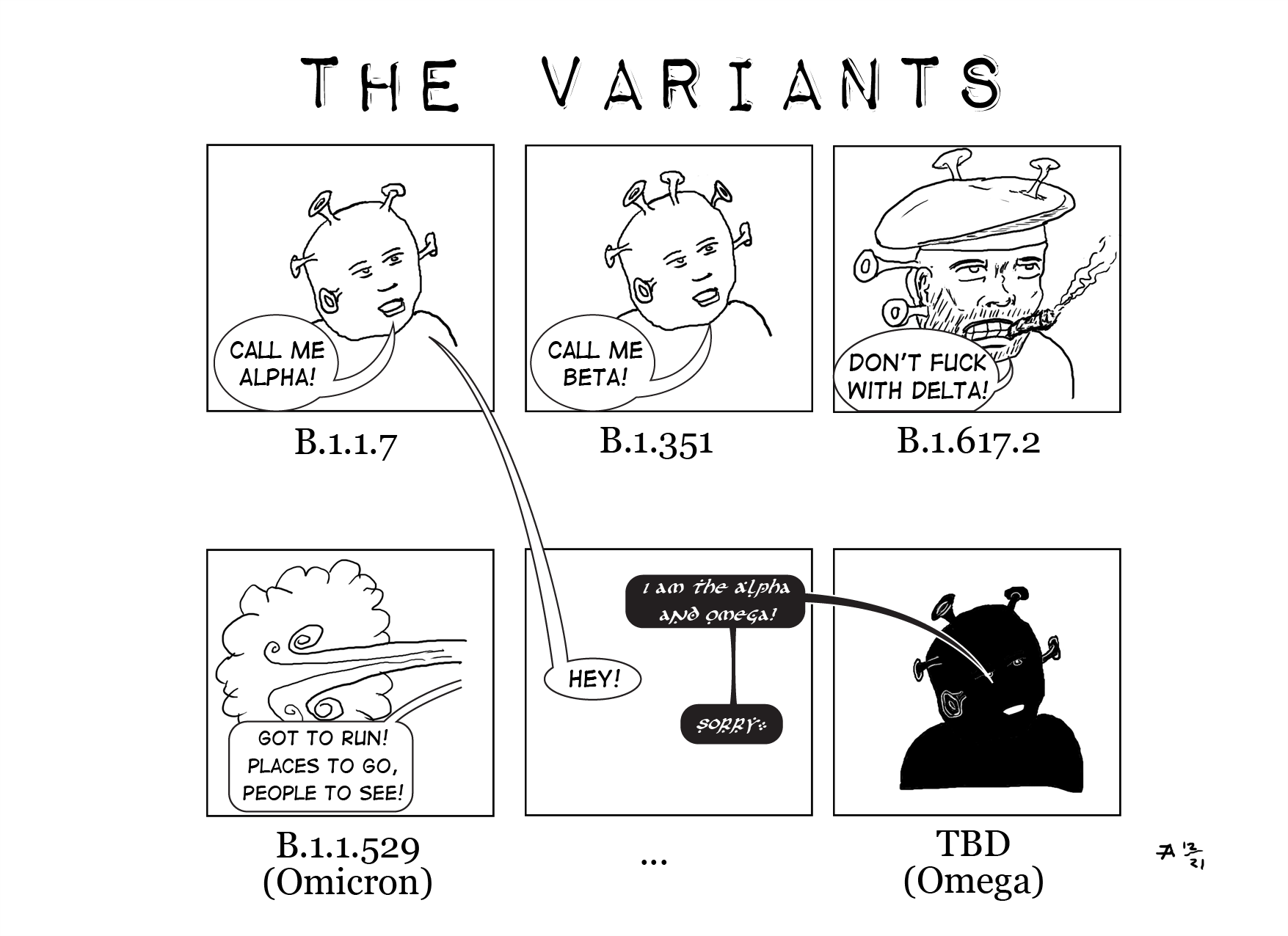 What's All This Then?

This was actually a pretty quick drawing. I did it in one night, probably just a few hours. I wanted to make some drawing before the end of the year. And I figured since Omicron is all the rage I should make my last Covid cartoon for 2021.

We seem to have had a spike of Omicron cases in December. And by "spike" I mean a sharp, fast rise to be almost eight times what our previous highest number of active cases were, and ten times the previous maximum of new cases in a day. Our hospitalizations has only hit a little over half of what our max was back in January. And in the last week and a half, our active cases have dropped from 2600 to 666. It was a sharp rise and a sharp fall. Also, the students are gone and many people are away, so we're not done. But the point is, it was even more of a local concern the last few weeks.

I draw this with a pencil and paper and then scanned it in. Behind paper I was drawing on, I had some graph paper, and I used that to mark out boundaries for the boxes and layout. The scanned version is very hard to see, unless the contrast is cranked up so much that there's a tone of noise and crap.

The corners of the boxes are easy to see. The 6th boxes contains the original thumbnail sketch for the whole drawing (rotated 90 degrees, as that was how I original drew it). At first I thought I might have 8 panels, but quickly got bored with that. I was going to include the original, so it'd be clear the variants are all minor variations. But then I figured going from Alpha to Beta would make that clear. I included all the Greek letter names, but in the third panel of the thumbnail I decided to include the technical letter/number designation. Later, I decided to use those and just have them mostly self-identify with speech balloons. It's clear I wanted the Delta to be a Delta Force type fighter, Omicron was just a "WHOOSH" because it moves so fast, and Omega would be the end, a shadowed figure since it hasn't happened yet.

In the full size pencil version, Alpha's a simple face with spikes on its head. I didn't bother to draw Beta, I just made a note that it'd be the same with a few changes (I removed one spike and added two others in the final version). Delta is the easiest to see, since there were a lot of details I wanted in it, like the cigar stub, the beret (with a few spikes going through it), and 5 o'clock shadow. I also wanted a more square jaw. The original text was "You'll need more body bags" (a kind of reference to the "First Blood" movie), but I kind of didn't like that joke given how many have died from Covid (makes it not really a joke).

I thought about coloring in Delta's uniform in camouflage using some pattern, but decided not to do this in color. Similarly, I was thinking I'd add a whoosh text to Omicron, but the cloud and speed lines seemed to make it clear, and by the time I had the speech balloon, there wasn't a lot of room. Once I put in Omega and put in his line of dialog, I figured Alpha would object to it. Also, it was a bit of laziness and trying to keep things simple, since there are a bunch of mutations in Omicron and I wasn't sure how to represent them. I think showing his behavior as different is a reasonable approach. I came up with the text for Omicron's speech when I added it. At that point I knew how much space I had.

I've typically used Illustrator for "inking" lately but this time I wanted to see if I could do it quicker with a simpler approach using Photoshop. I had a ton of layers. One layer for each of the panels, one for each panel border, with a folder for all of the borders, one for all of the speech balloons and their text, and one for all of the labels below the boxes. That made it easier to move things around within the boxes, and then make more space by sliding the boxes around a bit.

The drawing itself was with the brush tool which can vary the width of the lines from the pressure sensitive Wacom tablet. I didn't use a lof of variation here. And since I didn't color it, I didn't have to care if lines connected to other lines or had a tiny gap. So the drawing felt a bit more natural.

For Omega, when I did a flood-fill on a clone of Alpha, there were a few of the edges that didn't get filled. I removed most of them, but I decided I liked having the highlights to serve as lines for the reverse video, so it wasn't a complete silhouette. That included the eyes and the spikes. The mouth was more carved out from the outlines. The follow-on to that was that I decided his speech balloon and text would be in white on black as well. That was just a simple matter of setting the border and fill colors to white and black, respectively. I had to clip the bottom of Delta's speech balloon but that's easy.

Oh yeah, I made the speech balloons using Illustrator. I copied the Photoshop image into Illustrator as a reference. Made the balloons, then copied them back to Photoshop. So the sizing and positions were preserved in both directions. Omega's font isn't great, but I wanted somthing different and ominous and I didn't want to spend too much time on it. It's a little hard to read, but it's short enough that it shouldn't be a big distraction. And the title is an Impact Label font from blambot.com. It's a white-on-black font, so I set the color if it to be white and then put a small black rectangle behind it to switch it back to black-on-white. And I decided not to go with the first letter of the name being the Greek Letter because that only looks (very) marginally cool with delta. Omicron is identical, and Alpha and Beta don't fit very well.

With no color, shading, or backgrounds, it was way, way, way faster to get all this done. And that's about all for this—it was a pretty simple drawing.

Started and completed on Tuesday December 29, 2021.