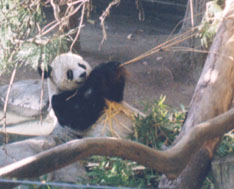 I spent the week of January 7th - 14th, 2006 out in San Diego, California. Part of it was for a meeting, part was for fun, and, unfortunately, part was spent just trying to shake feeling sick for a bit.

The trip highlights include going to Balboa park, the zoo, Ocean Beach, La Jolla, Torrey Pines, and flying over the area. Since I wasn't feeling that great for part of the time, I didn't take as many pictures as I normally do.

Here are some highlights.

Click on the thumbnail images to get larger ones (around 100-300K).

Balboa Park is a pretty huge park in San Diego. There are a dozen or more museums, wooded areas, a Japanese Friendship Garden, and more. It's a neat place to see. I was there a couple times, as you can only scratch the surface any one time.

The San Diego Zoo is an amazing place. Huge. They do a lot of work with endangered species, studying, breeding, and trying to help them. It's quite possible that in a few decades or so, zoos will be looked on in the same light as bear baiting contents, regardless of their intent. But for now, it is an impressive place.

I was there, like +30 years ago. I was probably 6ish at the time. My only memories of San Diego are that the zoo smelled bad (I have been informed that I held a handkerchief to my nose the entire time) and that the proboscis monkeys were cool. These are the monkeys with the ridiculously huge noses. I wanted to see them again. That was my mission.

I failed miserably. Apparently, they've been dead for decades. I guess a cage full of bones just wasn't drawing the crowds, so they've long since been removed. After a little digging I found that proboscis monkeys don't do well in captivity (i.e., they all die, quickly), and Borneo is the only place in the world where they live, and of course, their habitats are being destroyed. They're very endangered. I think I shall not be seeing them again.

But I digress. The zoo is pretty neat.

For photos and a description of my flight over the San Diego area, look here.

I went to La Jolla (pronounced "Lah Hoy-ah"; I'm such a gringo) which is just north of San Diego.

Torrey Pines State Reserve is just north of La Jolla. I didn't actually go to the park, as it was getting late and I didn't want to pay the entrance fee since they were closing in 30 minutes. Instead, I just parked my car in the neighborhood and wandered around by the beach. There were numerous people carrying surf boards and wearing wet suits, so it seemed to be the right direction.

Torrey Pines grow natively only in this area and on Santa Rosa Island off the coast of Santa Barbara. While endangered, they have been cultivated elsewhere. The trees "battered by the coastal winds" (as mentioned here) tend to grow in weird, funky shapes. Upon reflection, I realized why they seemed familiar in their strangeness. Theodor Geisel lived in La Jolla for some time. The trees clearly inspired some of the trees in the Dr. Seuss books.