My friend Deepak and I went backpacking and camping in the Monongahela National Forest in West Virginia Jul 18-19, 2008. We went on the Senaca Falls/High Meadow hike. It's supposed to be a three day (easy) hike, but we got bored and finished it in 2 days. The scenery was quite pretty. Here are some photo highlights.

Deepak loaned me a Nikon D40 camera to test drive for this outing. So I got to play with some zoom lenses and things like depth of field.

Click on the thumbnail images to get larger ones (around 100-300K). Click on the "huge" link to get the full size pictures (around 6M). Around 70 pictures included.

Below is a map of the trail we hiked, starting at the trailhead on the lower right corner. The blue labeled items are links to sections within this web page. Specifically, the Trailhead, the First Night Campsite, the Creek Crossing, Seneca Falls and where we had our Second Day's Lunch. 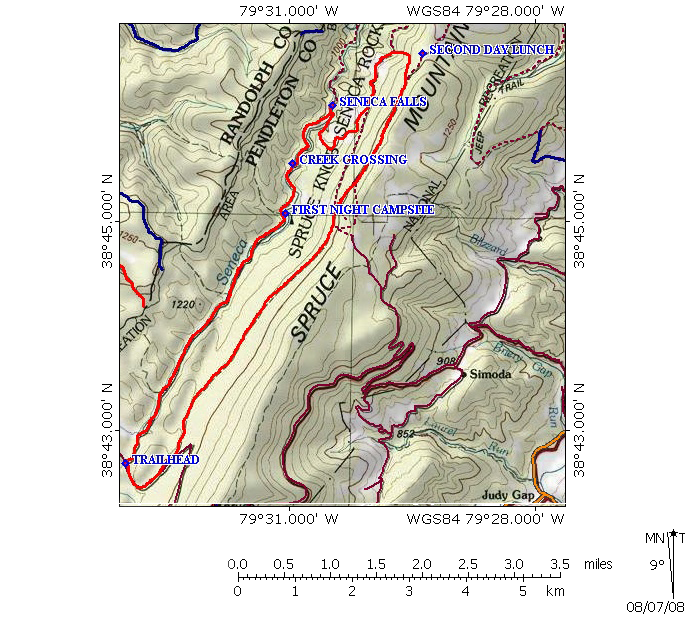 The Start of the Trail

We drove down to Elkins, WV from Bowie, MD, about 4 hours. By the time we got there it was around 2pm or so. After some set up, we had transformed into the daring, backcountry adventurers.

Deepak and Frank, with backpacks, ready to begin another adventure.

The first days' hike was pretty short, about 3 miles. We knew we'd be starting late-ish.

The trail followed the Seneca creek. Our first campsite was next to the creek. The tent is visible in the second picture.

A view of the far side of the creek and the water itself (with reflections of the late-day sun).

A signpost with our tent visible in the background (upper righthand side). And a closer view of our campsite with a rock circle around a fire pit.

The rocks around the fire pit were good for sitting, and in fact many had backs. And the one shown in the first picture had a back and armrests. Sweet! And it was comfortable too. In the lower righthand side of the picture, there is a small skull of some animal. The second picture is a close-up of the skull and jawbone. Perhaps aliens?

There was a bridge by the campsite to cross the creek (as we continued on the next day). A shot of the bridge from the creek, one from the railing of the bridge, and one just beyond the edge.

Three more shots of the bridge. In the last two, I used the signpost as a poor-man's tripod.

Deepak wanted to take some macro shots of flowers. He brought a cool, lightweight tripod with him (which is why I was using a signpost...). A few pictures of the different steps in trying to take a close-up picture of a wildflower. The results are (INSERT LINK HERE).

The second day was the uphill hike. It included Seneca Falls and the High Meadows. I took pictures of the former, but not the latter.

We stopped by a stream crossing fairly early in the morning to shoot a bunhc of pictures. In this one, Deepak had his tripod positioned in the stream and was on the far shore getting something. I used a flash for this shot. I have no idea what the energy-ball by Deepak is. Perhaps I had the flash on his camera (which I was borrowing) set to "plasma ball." Oooops...

Three shots of the stream in the morning.

Looking the other way up the stream, I took a few shots of the light breaking through the trees that shrowded the area.

Another shot of the rhododendron flowers. Then I looked back downstream and the leaves of the tree next to me was catching the light of the morning sun, practically glowing. That was neat and unexpected.

One more shot of a tree with the leaves glowing in the morning light, and two shots of a rhododendron tree. There were many, many rhododendron trees in the area, all with white flowers that had just a hint of pink in them.

Yet another rhododendron tree, a little underexposed to try to get the flowers. Looking back upstream, into the sun, I got shot of the area with lens flair speckles. And one more of the rhododendron flowers, again, a bit darker.

We probably spent 45-60 minutes in this area. It started with just a couple pictures, but as the sun broke through the trees, the scene was changing minute by minute and we were both fascinated by it. The first shot is o fthe sunlight illuminating the shore at the edge of the stream. The second is looking up the stream into the light again, this time with the water reflecting some o fthe light. And the third shot is of a rhododendron tree lit up in the morning light.

The first shot is similar to the last, just more underexposed. Deepak had loaned me his father's Nikon D40 camera, so I was doing a lot of experimentation with it and the settings. And two more shots of the stream.

Seneca Falls, towards the top of our hike, drops about 30 feet (10m). While it's not that huge, it's still quite pretty, and we spent some time taking pictures there.

I did some experiements with the 300mm zoom lens.

Three shots of Seneca falls from the top.

The first is another shot of the falls, with that kind of "well of souls" look to the stream. The second is the top of the alls with some leaves framing it in the foreground. And the third is a short depth of field shot with the leaves in the front and falls in the background. A shot that can't really be done with a point-and-shoot camera.

A shot of the top of the falls, and one showing the larger stream and the split twin streams.

I didn't take any shots of the high meadow. It was beautiful, but I didn't think I could do it justice. Without the perspective of being on a hillside, I think it would just look like some long shots of hills. It's possible to get a panoramic shot and Deepak took some pictures of that sort.

So we continued to our stopping point for the second day. We had lunch and then took a few shots of the flowers in the area. After that, we decided it was early enough that we didn't want to just sit around for 6 hours, and the nearest source of water was at least a 1/2 mile away. So we walked the third day's trip after that, getting to the car around 5pm and going home. So, we only stayed one night.

I don't really know what types of wildflowers these are. The first two are one type, with me trying to get a bit closer in the second shot. The third is obviously a different flower.

Two shots of some flowering grass or reeds, using a narrow depth of field. Normally, I don't really like a blurry background, but I do like how these are in focus and the background is mostly a similar color but very different, blurry shapes. I think I like the second shot more.

The first picture is of the tree around where we stopped for lunch. The second and third shots shows our backbacks, the food bag, and Deepak's water bottle. The rocks in the foreground were from a campfire. No rock chair with a back and armrests at this site.