I went to the 2013 EAA Airventure, also known as Oshkosh. I flew with Mike Carman, in his Mooney, on July 28, 2013. The last time I went to Oshkosh, I flew into the Appleton airport, this time we flew into the Oshkosh airport itself. It all went surprisingly smoothly and is quite well run. This page contains pictures from the flight to KOSH. I flew one leg, from the Robenhood airport in Michigan (KRQB) to West Bend airport in Wisconsin (KETB), but since I was busy flying, I have no pictures from that segment.

We left Ithaca around 8:30am. We delayed our original departure time a couple hours to let some weather pass. We took the northern route (the north shore of Lake Erie) and planned a fuel stop in Michigan. While it might be possible to make it non-stop, we'd be contending with headwinds and more importantly, since we had no ideas the sorts of delays we could face getting into Oshkosh, we wanted to have a significant amount of fuel in reserve for the KOSH arrival, at least 2 hours.

Leaving Ithaca, the clouds were around 3000' MSL, but raised to about 5000' past Seneca Lake (20 miles to the west). It kept improving as we approached Buffalo and opened up around Canada. Then approaching Michigan, the clouds began to build up again. We made it to Robenhood (KRQB) the planned fuel stop, but was getting difficult maintaining VFR at points, so we discussed our options on the ground. 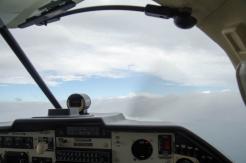 Heading towards Buffalo, we could see the weather was improving. 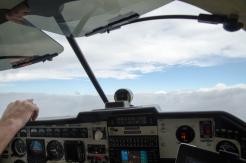 Mike points to the blue sky. 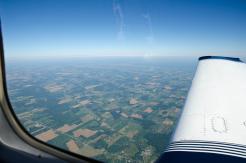 In Canada, it's CAVU (ceiling and visibility unlimited). Though since neither of us thought to...(more) 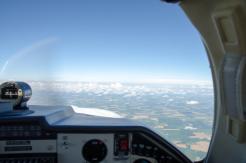 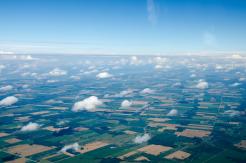 Still in Canada, getting closer to Michigan, clouds started to form again. 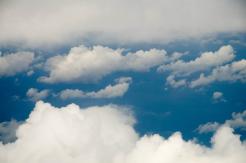 We had flight following, and they had reported a Meridian behind us for quite a while.. At some...(more) 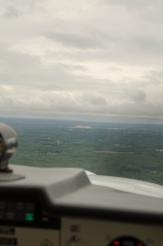 The weather was still VFR at Robenhood, however the overcast at 4000 feet or so meant that we would...(more) 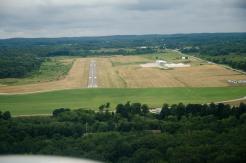 On final approach to Robenhood.

Mike and I discussed our options next. I'll go into more details in my writeup of the fights—this page concencrates mostly on the pictures. But the short version is that we decided for me to fly the next leg over the lake, IFR, since I'm IFR rated, and am comfortable flying a Mooney, even though his had some minor differences in instrument layout. The weather would be good enough that we'd break out around 3000' and not need to do an instrument approach (but I was prepared to do so, if necessary). I did not, however, want to fly into Oshkosh. With the amount of traffic, I preferred to help spot traffic and have him fly that leg, rather than have to fly someone else's plane into a very busy airport. And thus we did. The leg from Robenhood to West Bend, Wisconsin (KETB) was mostly uneventful (other than having to wait for an inbound plane to land and getting a wrong frequency from clearance delivery).

After that, we checked the weather, and it seemed fine. The flight to Oshkosh would not be far. We'd fly at 2500' until we near the beginning of the Oshkosh arrival procedures, at which point we'd decend to 1800', decrease our speed to 90 knots, lower the gear (as per the procedures and also helps keep us at 90), and turn on our lights. There was some inbound traffic, and it took two tries before there was enough of a space in traffic for us to fit, but basically it was pretty easy. And I think it was quite helpful to have two sets of eyes. Mike could fly the plane and keep an eye on the traffic ahead of us, I could look all around for other traffic, verify we were at the right place (or spot the railroad tracks we were to follow), confirm our position with the GPS, look up frequencies we'd need, and so on. ATC does a very good job at keeping things running smoothly. 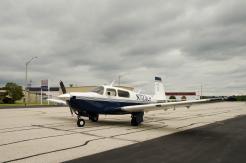 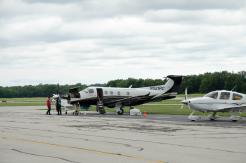 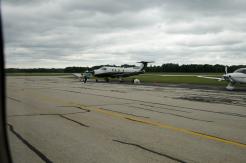 The PC-12, cowling off, testing its engine. A man, presumably a mechanic, stands next to it,...(more) 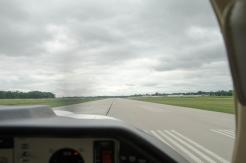 On the takeoff roll from Runway 31 from KETB. 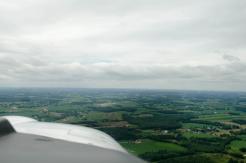 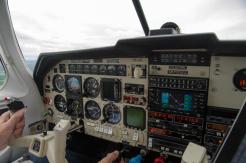 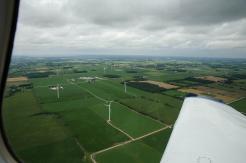 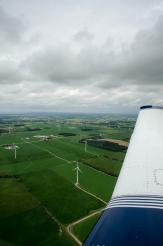 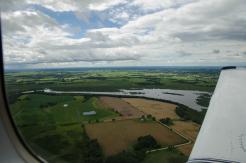 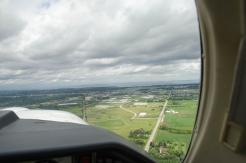 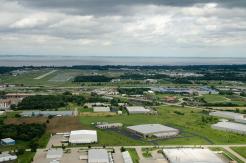 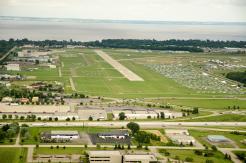 We're heading north and KOSH is directly east of us and Lake Winebago is visible beyond the...(more) 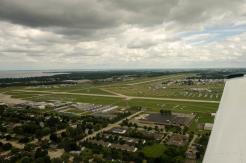 On right downwind for Runway 27. The sea of planes south of the runway can be seen as organized...(more) 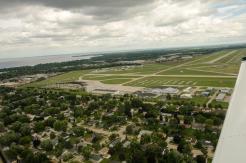 Downwind for Runway 27. We're north of the airport, flying over the neighborhood where the house...(more) 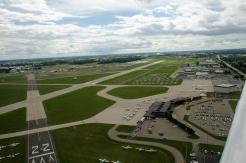 On the base leg for Runway 27; we were at the northeast corner of the airport at that point. 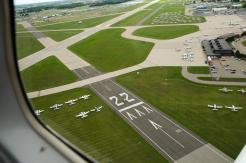 On the base leg, looking at the closed Runway 22 (there's a little stand right between the two "2"s...(more) 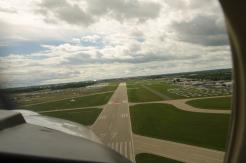 Turning base to final for Runway 27. I'm not sure, I think they had us land on the orange dot on...(more) 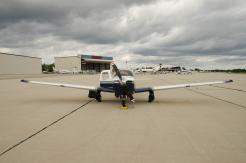 Mooney N723LP parked at the Basler FBO at Oshkosh.