I left Ithaca Monday night, April 9, 2018, connected through Newark, and then on to London Heathrow airport, arriving around 10am Tuesday morning. They parked the plane out in the middle of nowhere. We used air-stairs to exit the plane and then they put us on a bus to get to the terminal. Passport control, customers, baggage claim, and all that went very smoothly.

After some initial orientation (and disorientation) in the airport trying to figure out how to take out some money (or find a machine that would accept my card and not gouge me), I was on my way. I took the "Underground" (subway) into London (King's Cross Station). I must admit that whenever I hear or read the word Underground, the refrain from the theme song to the movie Labyrinth starts going through my mind. Anyway, after that I exited the Underground station to get to King's Cross Rail Station (just next to it), figured out how to get the next train to Cambridge, and in doing so, missed it, and then purchased a ticket to what was the next next train to Cambridge. Oh, and speaking of Labyrinth and other fantasy stuff, King's Cross station is the one in Harry Potter and there was a wall with a sign for Platform 9¾ and people around it taking pictures (not sure if it was free or not).

I will say that while train travel is convenient and effective and all that stuff, it really is little more than a subway train with seats facing front and back, instead of sideways, with longer gaps between stations. I still feel that trains should have more of an "Orient Express" feel to them, or at least what I imagine it should be from books and movies and TV shows. Except the killing. That was on one of my first train trips, a 3 hour trip from Portland to Seattle back in 2010. So in retrospect, I guess I'm OK with boring trips with little early 20th century wooden charm, if the train doesn't kill anyone. 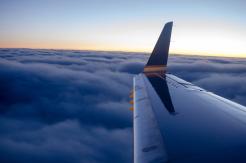 A view from the flight from Ithaca as we were over the clouds. 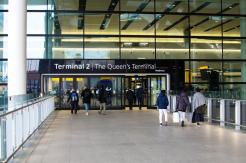 I arrived in Terminal 2 in Heathrow. It's the Queen's Terminal, but she's...(more) 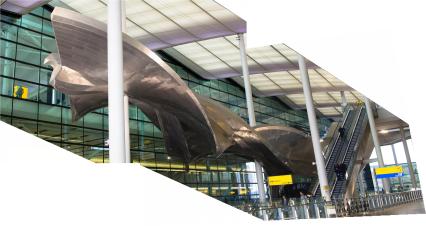 There was a funky artsy sculpture outside of the terminal (I think it was...(more) 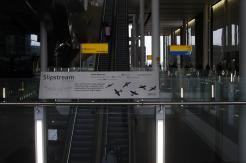 Information about Slipstream, the name of the sculpture. 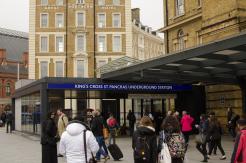 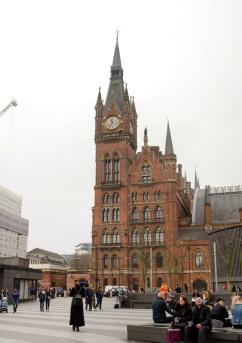 Multi-picture of um...I guess it's the other train station next to King's...(more) 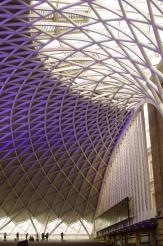 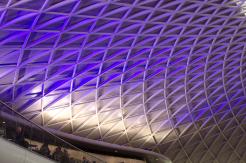 I liked the geometric pattern and purple lighting. 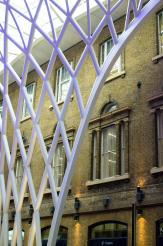 It reminded me of the ceiling in part of the British Museum (from a previous...(more) 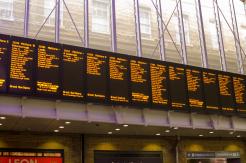 The Big Board showing the next and next next trains. 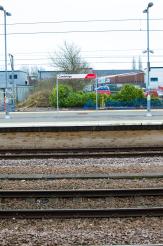