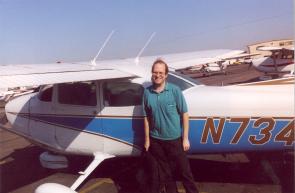 I arranged to take a flight in a Cessna Skyhawk with an instructor around the San Diego area from San Diego Montgomery Field (KMYF), Friday, January 13, 2006. The CFI was Michael Upson of Guaranteed Aviation. He's a co-owner of Guaranteed Aviation, flies Part 135 as well as instructs, is an FAA Safety Counselor, and has been flying in the area since the '70s (I think). The plane, N734DN, was a 1977 Cessna 172. Pretty much a normal Skyhawk, though it has a tuned exhaust system that gives it a "throatier" sound and a little more power out of the 160 HP engine.

We discussed the route and what we'd see and do. Michael asked if I'd like to do an instrument approach and I said it sounded fun, sure.

The plan was to head straight out (west) to the coast, keeping below the Class B airspace. Head past La Jolla, Torrey Pines, and that area and then head back inland. Look over the area there. Do a landing at a small airport called Fallbrook. Then head down south and do an approach back into Montgomery. While outbound, we could scope out how it looked to the south over San Diego. If things were good, we could go south towards Brown field which is just north of the Mexico border, then head north up through the Class B VFR corridor through San Diego back to Montgomery. The reports were saying San Diego (Lindbergh Field) was IFR.

The preflight was uneventful­it's a Skyhawk. Started the engine, picked up the ATIS. Taxied to Runway 27-Left. Did the run-up. Micheal gave a safety briefing, including where we'd land if we had problems in the air below 500' AGL (a field off to the left).

We were cleared for takeoff and departed straight out to the west. 4DN was pretty peppy, accelerating nicely and climbing at a good clip. We leveled off at 1500' AGL to keep us under the Class Bravo airspace. The Terminal Chart (which is a magnified sectional chart) showed a mess of airspace chunks and pieces. Definitely something you want to understand while still on the ground.

Looking left to the south, we could see San Diego was socked-in. Coastal fog. A maritime layer. Temperature inversion. Aliens. Call it whatever, but we wouldn't be going south VFR, nor flying in the VFR corridor. Lindburgh only has one runway, so when the field goes IFR, everything gets backed up.

As we headed towards the coast, no water was visible. Instead, an ocean of clouds stood there at maybe 1000' AGL. A solid ocean of clouds westward, with some of the wisps reaching to the coast. Since we had to stay below the Class Bravo, we continued west, with the cloud fingers reaching under us and turned northward just over the the water.

Michael pointed out that one of California's only nude beaches (there are only two in the state) was right there. The astute reader will notice that it was indeed right there, completely fucking shrouded in clouds. What the hell? For a moment, I was back watching the play Equus at Cornell sitting in one of maybe a dozen seats in the theater that had the nudity blocked by the other actors on stage. Yes, it's a deeply disturbing, darkly psychological play. But I missed the good bits. But I digress. Anyway, no nudity. Besides, it's January. Too cold for nakedity.

We headed north and then called up the Palomar tower to request permission to transit through their (class D) airspace from south to north. They said "ident" (we were squawking 1200) and then identified us and approved the transition. They must have had a BRITE radar feed in the tower. They said sure. There was a plane landing, and two in the pattern. Shortly, we spotted one and then the other. One was on downwind north of the field, at our altitude (1500'), so we climbed a few hundred feet and he passed under us. Then we dropped back down.

After reporting we were clear of the Palomar airspace, they told us the familar "frequency change approved." I think they might've come back with a "good day" or something, so I did the double-click to acknowledge it. Michael then said "now we click our heel together three times to get the ATIS." I must admit, I didn't quite get that.

Turns out, Fallbrook airport has an automated weather advisory thing that broadcasts when you click on the frequency 3 times. Nutty. It reported the wind and then said which runway it favored. Kind of cool.

Finding Fallbrook was the next challenge. It's a pretty small field, one north/south runway, 2100 feet long. We entered the left downwind for runway 18. Michael pointed out that 4DN had flaps that could go to 40°. While that's a plus for short fields, the downside is that if you have to go around and have any problem getting the flaps up, you simply won't be able to climb.

On final approach, I used the standard spot landing technique, slowing up a little until to increase the sink-rate, then going for 60-65 knots and using the power to keep me on the profile (or a little low). I opted to only use 30° of flaps, since I'm used to that and said that was what I'd be doing. There was a 50° cross wind, though only 5 knots or so. We touched down where we needed to, and I was able to stop the plane with about half the runway remaining. That's probably about 1200-1300 feet. Not bad. We taxied back to 18.

Michael mentioned how all these airports are in jeopardy. Decades ago, there was nothing around. Now there are houses nearby, people complain of noise (they moved next to an airport, what did they think they'd be hearing?) and such. It's not a good situation and, unfortunately, very common.

We took off and climbed heading towards the inland valley, surrounded by some hills. As we climbed, as said that I'd like to take a picture of the area. He took the plane and said that Mt. Palomar was just up ahead and the observatory was at the top of it. I said, "cool." He throttled up and we started climbing as I got my camera out. We were parallel to the top of the mountain around 6500'. I got a few shots of the valley and the observatory.

Then we headed back as I took the plane. Michael pointed out that some mountains to the north marked the board of LA, and some other mountains to the south were in Mexico. It was pretty cool. I knew those areas were close, but didn't really have a good feel for just how closer they were. We also passed over an Indian cassino. Looked pretty small.

An Approach with SoCal

He asked if I'd like to shoot an approach, I said yes. He called up SoCal (Southern California) Approach, requesting an approach to Montgomery Field. Nothing. He tried again. Silence. He called for a radio check. Zip. He tried again with a brief "SoCal Approach, Cessna 734DN." Each time he tried, he waited 30 seconds or so before trying again. Finally, ATC came back, saying, rather snipily, something along the lines of "Cessna calling, we read, expect a delay." Michael keyed the mic and replied, "Thank you. I'm not psychic."

Ah yes, ATC with attitude. On the other hand, I wasn't sure if that would be a way to get on their good side. Anyway, he came back a minute or so later asking for our request. We requested the ILS at Montgomery, full-stop. The controller gave us a squawk code, a vector (i.e., a heading to fly) and said, "maintain VFR."

I put on the hood, but kept it up and said I'd put it down once we got a little closer. We got another vector, something like a 230 heading. Then the controller gave us a turn to a heading of 270 and said, "the next controller isn't taking the handoff." We looked at each other. I wasn't quite sure what he meant by that.

Michael asked if that meant we wouldn't get the approach and said we'd just go visual if that was the case. His hand was already on the transponder ready to dial in 1200 (the generic VFR squawk code). The controller replied, "No, I didn't say you won't get the approach. I just said that the next controller isn't taking the handoff at this time" and gave you a vector. We said OK, we'd continue.

Michael then said to me, "Oh... Lindburgh [Field, San Diego's main airport] is socked in, and so things must be stacked up, and ATC must be busy." He paused for a second or two and smiled a slightly evil smile, and then added, "good." I suppose they must've worked things out, because we got a handoff to a new frequency.

I checked in (I was out of practice...I forgot to include my altitude in the initial call, but he didn't seem to mind) and we got a new vector and a descent to 4000 feet. As we got closer, Michael, being the good CFI (who, as an FAA safety counselor, flies with pilots who have busted into various airspace, typically Class B), asked ATC to confirm that we were cleared into the Class Bravo airspace. ATC replied that there WAS NO Bravo airspace. No, it's not some "there is no spoon" philosophy from The Matrix. He added, in a slightly condescending tone, "You are IFR, you don't need to be cleared into class bravo." This is true, however we had been advised by the previous controller to "maintain VFR" which implies that we were NOT IFR. Michael verified and said that we'll remain IFR.

The approach was pretty straightforward. I went under the hood once we started getting close to the localizer. I had to descend and catch the localizer. And then pick up the glideslope. We were cleared for the approach. I was flying the approach a bit fast, around 120. Partially it was laziness, partially I was kind of interested in doing it a little faster, and partially I probably wanted to minimize the time for that segment. I throttled back at Michael's suggestion. The approach went pretty well and I think I went visual a little below 300' AGL (above ground level). The runway (28R) had a displaced threshold, which is still a little funky for me. I'd like to land where the runway starts, rather than 500' or so beyond it, but the VASI helps with that. After touchdown, Michael did the initial taxi to expedite us going the right way, then I taxied back.

I think the whole flight was 1.4. It was fun and a nice way to see the area as well as get a taste for ATC in the area. In a way it's odd that I flew part of a "scenic flight" under the hood, but I did get to see a quite a bit.
This page last modified Jun 28, 2009.
Home