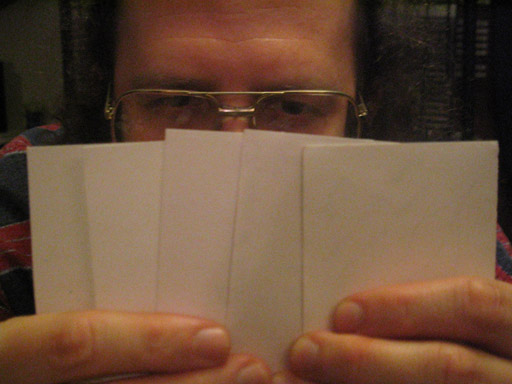 Would you like to play a game?
Pick a card, any card (wrong!!!)
Concentrate...concentrate...is THIS your card?
Read them and weep, boys.
In our annual game of "telephone pictionary" in Columbus, January 2006 (OK, so sue me, one was New Years Eve, December 2005), there were two good ones related to me! Click on the thumbnail images for a scan of the full sheet with all its evolutions.

The clue on the first one was "Frank will make me regret this." Benn, sitting next to me, wrote it. Ferf then drew the universal representation of Frank, if I wore my hair long and wore a bowler hat. For some reason, it was then translated into a "crazy woman" and went downhill from there. It circulated away from me, so I didn't see it until it was complete.

For the second one, I was talking to Alli about my web pages and email address. She wrote it down my email address and then gave it to me as a clue!?! How does one represent "dot" or "com" as a picture? "com" is not even a real word. And MyCause sure as hell isn't one either. It's a rare case for me to admit when I'm stumped, but I was. I started to draw someone reading mail, but kind of drew a blank, literally and figuratively, at that point. I forget, it might have been Anna that had the misfortune of trying to extract some meaning from it. The notion of the Internet did stay through it all...sort of. Ferf's gmail-like interface receiving a message from God was particularly inspired (perhaps not as good as the "crazy lady" representation of me, but close).
Curious about this game? Download a PDF of the telephone pictionary form (courtesey of Catherine) and see for yourself how much fun it can be. It consists of 2 pages: one is for a 5 round version of the game, the other is a 7 round version (the 7 round is more fun, if you have enough people).

As part of a post-wedding party, I helpd friends make a Rube Goldberg Wedding Machine.
Lots of fun.
Here's a way too detailed desciption of it.

No time here and now for PLAY
THIS looks like a job for FRANK!
AWAAAAAAYYYYY!!!!!