Friends (Ruth and Benj) got married Saturday May 11, 2013, and on Sunday, May 12, 2013, they had a post-wedding celebration, a.k.a. Sunday Funday, a.k.a. Ruth's birthday. They had a big tent set up in their back yard, with lots of food and stuff. They also had a group activity. They formed 5 groups from the willing participants, provided each group with an area to work (2 tables), a box of various objects, and access to general purpose things (wood, cardboard, tools, pipes, duct and electricians tape, and lots more).

Each group was challenged to build a Rube Goldberg style machine given the available supplies. Each machine would trigger the next one in sequence. And the final machine would trigger a trebuchet that they provided that would fling cake (well, a cup cake) at the bridge and groom, about 20 feet away. We had about 2 hours to work on it, while chatting and socializing. At some point, they also suggested that we should talk to the neighboring groups, to make sure one machine could trigger the next one.

There were a handful of people in our group, including several engineers plus a carpenter/contractor, who could actually translate theory into practice. There were also a few kids (~10 years old) who were interested in helping and were able to make important pieces of the machine. Also, everyone got along. There were no egos or assholes, and that seemed to be the case with all of the groups. Perhaps that reflects on the type of people Ruth and Benj like. Also, since it was a cooperative activity, we weren't competing with the other teams. Sometimes someone from another group would ask us if we needed some parts, and almost every time it was something we didn't need and were happy to give to them.

Having seen things like the OK Go video "This Too Shall Pass" and similarly complex Rube Goldberg machines, I assumed that the way it worked as that a bunch of engineers got together with some draft paper, slide rules, computers, and a book of equations. But the way it worked was quite different.

It really was an "organic" "bottom up" process. Or in other words "total chaos, experiments, and duct tape," but it turned out well. It could be summarized as follows:

Here are a few examples.

As it turns out, ours was to be the first machine, so no one had to trigger us. Triggering the next group was a bit tricky, but once we got the cart working, we were able to make our machine generate a good tug on a string that went through the tent through a few pulleys and into the next team's machine.

The cool thing about these machines is they provide a visceral demonstration of basic physics. Potential and kinetic energy. Friction. Moment-arms and momentum. Force over area and distance. And of course the "simple machines" like the lever, wheel and axle, pulley, and inclined plane.

Below is a design for the Rube Goldberg Wedding Machine, as presented and described in Figures 1 - 6 (patent not pending). 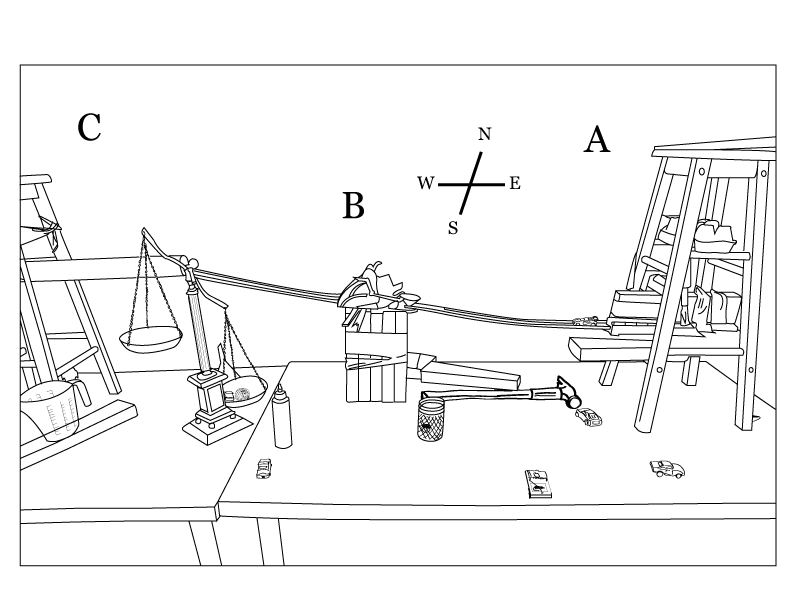 Machine #1 of the basic Wedding Machine (Series 4700) serves as the front-end to a series of 5 machines, custom designed to assist with wedding necessities, viz: fair distribution of nuptial cake to bride and groom. We describe the operation of WM-S4700 Machine #1 below.

Figure 1 shows the basic system, which comprises 3 components, labeled A, B, and C in the figure. Roughly speaking, Component A comprises the stool, its supporting mechanisms, and connecting track; Component B comprises the central support structure, the incoming and outgoing track, and car exchange mechanism; Component C comprises the second stool, its support mechanisms, large tube, funnel, ramp, cart, and remainder of the machine. Any tools, spare parts, or additional components that appear in the diagrams but are not described are not intrinsic to the operation of the machine and are included for field maintenance, redundancy, or aesthetic reasons.

Each subsystem is described below. 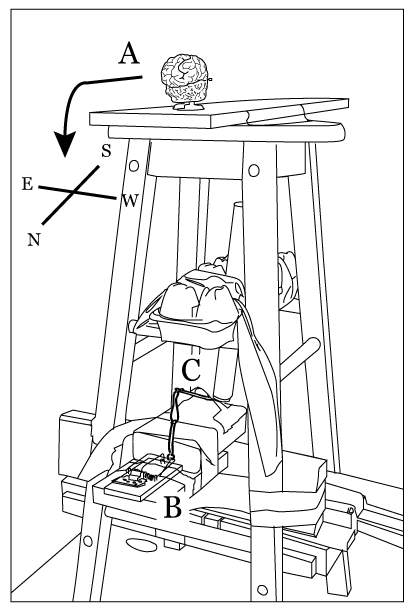 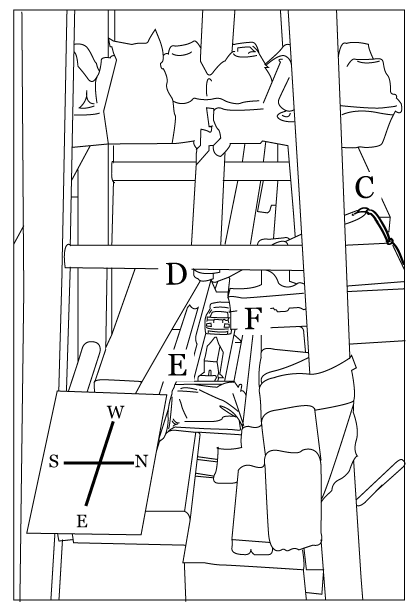 Figure 2 shows a detailed view of Component A, the beginning of the machine. 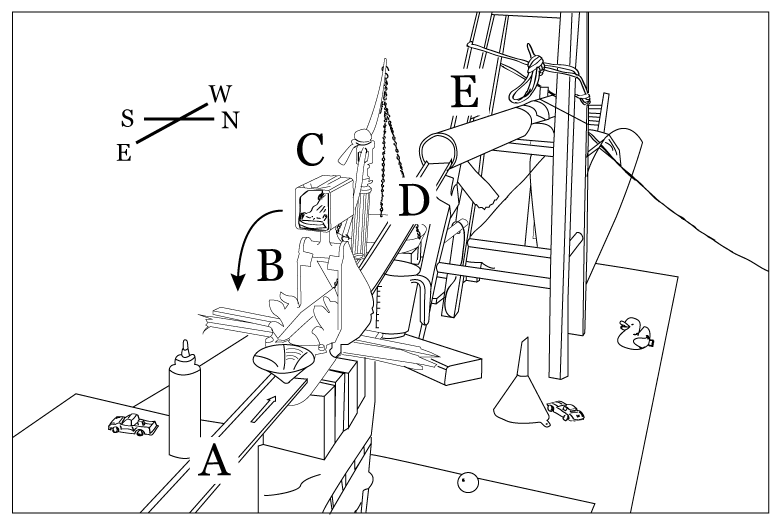 Figure 4 shows the details of Component B, the middle of the system. Race Car F from Figure 3 travels up Track A, striking the trigger funnel of #2 Toy Car Launcher B. When triggered, Toy Car Carrier C rapidly rotates 180° counter-clockwise (as shown in the figure), launching the second race car up Track D. Track D terminates at the mouth of Large Tube E. #2 Toy Car will strike a golf ball at the entrance to Large Tube E, sending the golf ball rolling down Large Tube E. The description continues with Component C in the next figure. 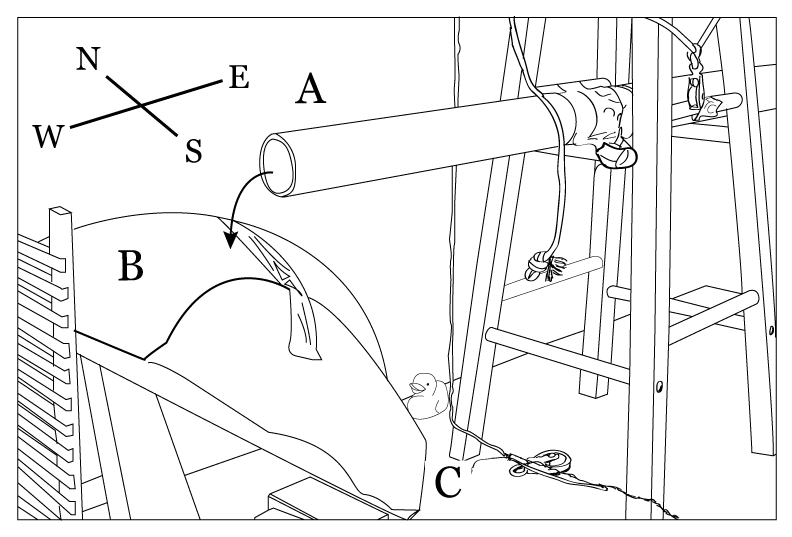 Figure 5 shows the first part of Component C. The golf ball set into motion at the end of the previous component, exits the Large Tube at Point A and falls into Funnel B. Duct tape creates the taco-like shape of Funnel B, and wooden slats and blocks set its height and position. These are designed to damp and redirect the Motion of the golf ball so it will exit the Funnel B, rolling (not bouncing) out at Point C. 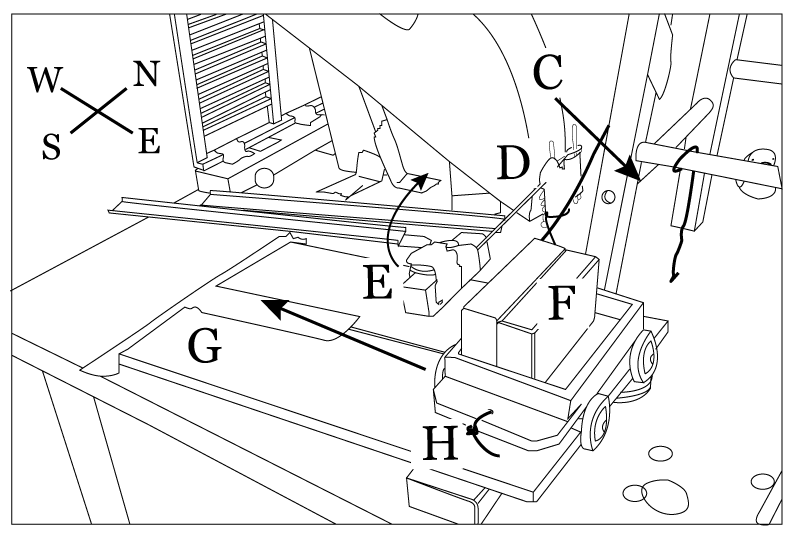 Figure 6 shows the second part of Component C. The golf ball exists the Funnel at point C, striking Gate D, which is composed of a series of tongue depressors, connected via long metal rod to Weighted Chock E. When Gate D is struck by the golf ball, it will cause Weighted Chock E to pivot out of position. This will release Cart F to roll down Ramp G. (Note: Cart F would normally sit 90° perpendicular to the position shown, in its normal, "armed and ready" position with the right front wheel blocked by Weighted Chock E). When Cart F rolls off the table, it will pull on String H, which is tied to the front of the cart, and is fed through pulleys to the first trigger point of Machine #2, thus activating the second machine in the Wedding Machine sequence.

The reliability of Machine #1 has been shown to be near 100% during field testing.

Putting it All Together

Finally, here's a video of the whole magilla. Our machine is first. The next ones require the human touch to get, or keep, them going. The video doesn't follow the middle machines as well, since I wasn't that familiar with what they were doing. In the end, Benj catches the cupcake in his mouth after a flying leap.