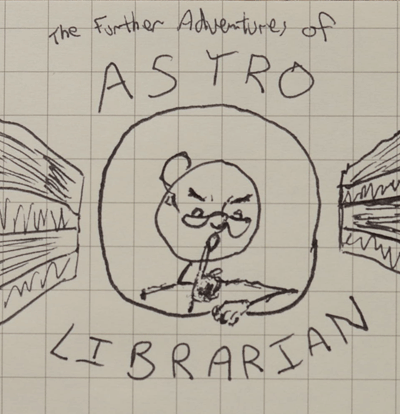 At trivia, a friend had a small ruled notepad. I commented at how it would be very useful as a flip-book for animations. She challenged me to do such a thing. I did. She is a librarian for astronomy (and physics and other stuff), so I decided to make a story that reflects a typical workday for her (as I imagine). Thus, I decided to create the thrilling bibliographical adventures of the Astro-Librarian.

This was mostly low-tech. I hand-drew each image in ink. Because the notebook had graph paper, it made it easier to keep the drawings sort of consistent from page to page. There were "only" about 70 pages, which limited what I could do for the story. Initally, I came up with 7 basic story parts (e.g., the rocket launch sequence or the space travel one), allocating each one around 10 frames. A simple walking sequence can easily take 8 frames. So the appropriate flipping speed ranges from maybe a half-second to a couple seconds for the "dramatic" bits.

When I was close to the end, with 5 pages left, I did draw a few small test doodles so I'd know how to fit everything I wanted in at the end. Up until that point, I was simply generating pictures "by the seat of my pants" (or pulling them out of my ass, if you want a less complimentary description). No pencil drawings just do it in ink. That's why the car sequence looks so weird and the "trees" the car drives by are equally indecipherable.

I managed to finish it in 2 days. Probably a couple hours total, if that much.

Then it occurred to me that I won't actually have a copy of it once I give it back to my friend. I was mentioning that to another friend, who reminded me that my camera has the capability of taking a series of pictures at a programmable interval. So I put my camera on a tripod, used my 50mm prime lens (75mm effective, gives a little zoom factor which works nicely), set it to take pictures once every 5 seconds (I tried 3 and that was too fast) on a low resolution, JPEG mode, and then had it merrily snap away while I flipped the pages between shots. There were a bunch times I wasn't fast enough, but I just let the camera take another picture. Actually, for the last 2 images, I had to trigger the shutter manually, because the auto-sequence had ended (I had set it to take 81 pictures, so there were a bunch of shots with my hand in it). And of course, things moved a little, so they don't look perfect. But it was close enough. So it roughly took 6 minutes to photograph all the pages in the booklet. Not bad.

Then I tried to put the pictures into photoshop, but 70 jpegs of even a modest size turned out to be a bit too huge. So I cut the resolution down using ImageMagick via the command line (impressive tool), and then tried it again. I used the Photoshop scripting capability to read all the files into a separate layer, and then turned each layer into a separate animation frame. I moved a few images around and deleted all of the shots of my hands, and then set the timing. And then I tried to export it, and Photoshop needed about 10 minutes to think about it before giving its answer ("no"). I managed to save the .psd file, since I had already spent time rearranging things and setting the frame timings. It wasn't easy to do, because Photoshop was in a bit of a mood, but it worked. I shut down, cleared some disk space on my VM, then allowed Photoshop access to my external drive to use as extra scratch space.

Then I cut the resolution down again. Each time, I reduced it to 50% of what it was. And then I cropped the image to further shrink it. That is the big image link about, 20M of GIF (which was 25% of a low-resolution, cropped photo). And then I reduced it again to produce the 5M GIF. All in all it didn't come out that bad, considering how low tech everything was.