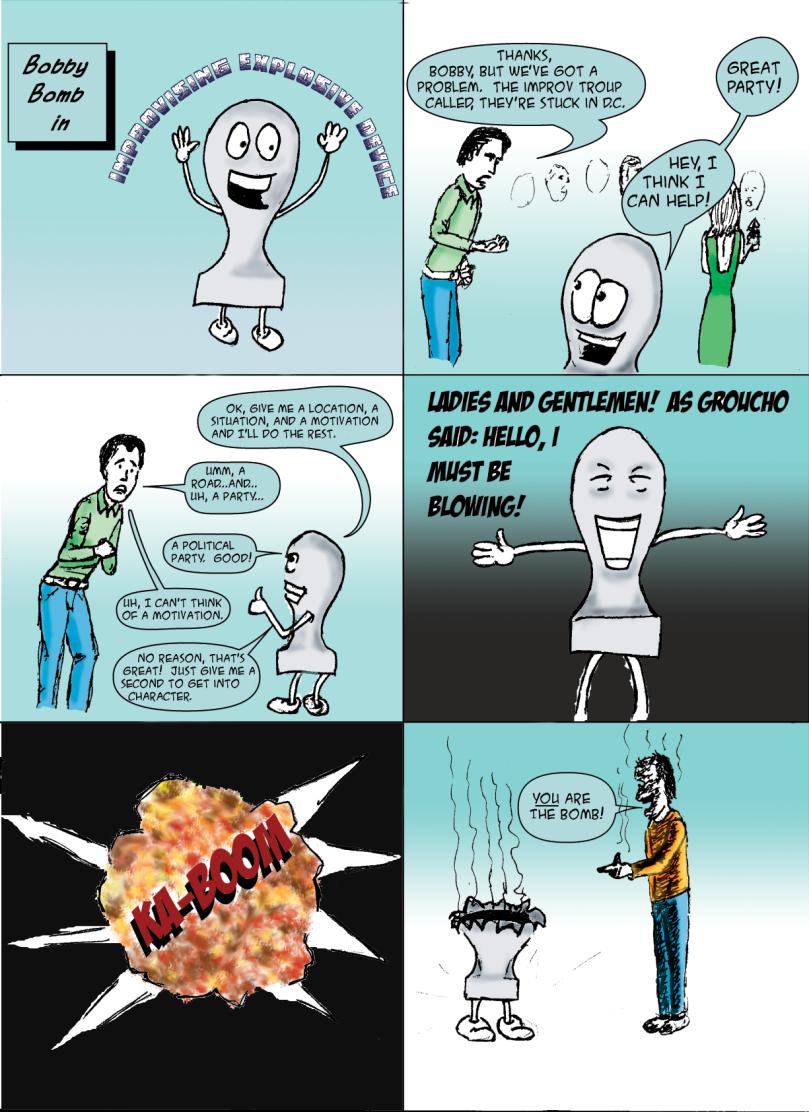 OK, this one might need a bit of an explanation (because my other drawings are such lucid statements). First, it came about due to a confluence of a few events. A friend of mine used the last line in an email message (well, actually it was "da" rather than "the" but close enough). Second, there was the article on the ABC New Anchor and his cameraman who "got blown up real good" (to quote SCTV) by an "improvised explosive device" (IED) (fortunately, they both survived the explosion). Third, someone was talking on the radio about how terms are bandied about that reduce the meaning and impact of things, such as "collateral damage" rather than "innocents killed." IED started to feel like such a term, making it almost cutesy rather than conveying the horror of things. And finally, I've been reading Bob The Angry Flower and Tom the Dancing Bug and appreciate simple drawings, especially ones that are able to convey emotions with just eyes and a mouth.

So the cutesy term became an anthropomorphized object, and a very happy one at that, as well as the "happy" ending in which someone who was the victim of the explosion, is equally as happy as Bobby.

The title Improvising Explosive Device became a pun on the IED term. The pun drove the rest of it. How would a bomb improvise? Well, he had to be thrown into a situation where he needed to improvise, in two senses of the word. In the theatrical sense, he looks for the standard volunteered scene set-up ideas a comic would use.

Of course a road is particularly well-suited for a roadside bomb. The party he simply interprets as a political party, as is his (hidden?) agenda. And the "no reason"? So much of the violence these days is directed at anyone and everyone. Yes, there are foundations, but for the death of a specific individual, it's usually simply being in the wrong place as the wrong time. Oooooo, is this a political statement? I don't know, I suppose it depends on how you read it.

A few more things. First, I figured he'd have to introduce himself. At first he was going to say "hello" but then I thought "goodbye" would be better, then I remembered Groucho Marx's wonderful song from the movie "Animal Crackers" and was able to fit in a painful though appropriate pun. Two painful puns in one drawing! Woo hoo! Three if you count "political party" though that's not really exploited as a pun.

The explosion on the 5th frame is not, I repeat not, a close-up of a pizza. I hand-drew that in photoshop playing with the blur and smear tool. It's close though not exactly what I wanted; specifically, it's close enough for me.

And that's the final point. This was an exercise on getting something done relatively quickly. It took two days from initial sketch to final colored and lettered version. There are flaws. The "Great Party" balloon should be elsewhere, higher. It's intended to be the first thing said on panel 2. I forgot to ink Bobby's mouth in panel 4 (though at least one hand-inked version exists). A few of the letters didn't get the background color in that same panel (again, I don't care). And there are some star-pattern residue marks in the final frame that I forgot to ink and didn't erase, so they show up lightly in the panel.

OK, way too much information, I know...