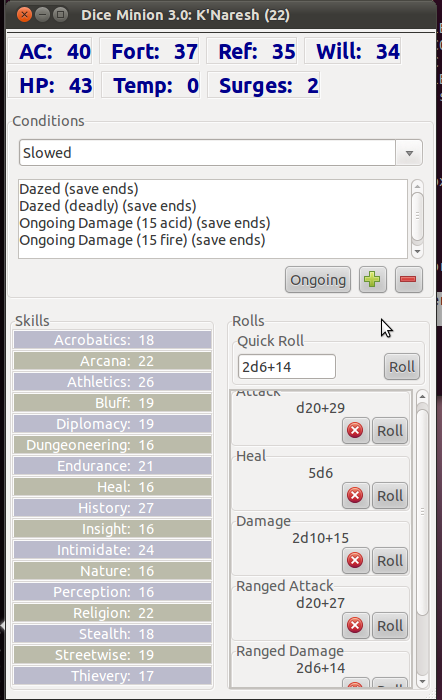 Dice Minion (DM) is a program I wrote to help track status for characters for 4th Edition Dungeons and Dragons (D&D). It's meant to be used in conjunction with the character sheet in whatever form (online or printed).

The new version reads monster files when cut and pasted into a text file from the Monster Builder program. Multiple PC and Monster characters can be open at the same time.

Dice Minon is meant to replace the index cards I use to track things like hit points, temporary hit points, surges, and ongoing conditions. It can generate dice rolls for skills or arbitrary D&D dice expressions. It has undo and redo and can save (and read) files in its own (.dm) format.

This version (version 3) was a recoding in Python and a simplification. Because Wizards of the Coast discontinued their programs for generating characters and monsters (favoring a web-based interface where they store it all on their servers), I dropped all that support. Given all the complicated, interrelated and interacting rules, it's easier just to make your own notes. This version can be used for PCs or Monsters since it just tracks stats and rolls. What you do with it and how is your business. It does not track encounter and daily abilities (though you could use the notes box to track such things if you really felt like it).

The original version was heavily inspired by Asmor's Digital Squire. This one less so, as it's a complete rewrite of my original code in Python.

DM is a set of Python (version 2) scripts and is intended to run under Linux and uses gtk2 for the graphic user interface. It should run under most Linux distributions.

Download the gzip'ed tar file, unpack it in a directory.


Run it by invoking dm.py.

Feel free to give me feedback on the program. Send email to my first name @ this site.