Saturday October 12, 2019. It's been about 10 years since Deepak and I last went to World's End State Park in Pennsylvania. And after the rain caused us to bail after the previous try, it was time to try again. So we met in Williamsport, PA from October 11-13, 2019. We origially were going to camp there but the site was full, so we get a hotel in the closest reasonably-sized town (Williamsport, PA). I was OK with the concept of not being cold, wet, or uncomfortable. We arrived at the hotel on Friday night. Spent a few hours chatting and catching up and then went to Wegmans to get some lunch snacks for the next day. 10 years ago we had dinner at that Wegmans because it was late and we ran out of options. Then we drove to the park and commenced our hiking. We hiked from the visitor center up the High Rock Trail and stopped briefly at the High Rock Vista and took some pictures. Then we took the Loyalsock Trail towards the Alpine Falls. We stopped and had a simple lunch in the woods and then continued on the trail. Apparently we missed the falls and overshot it by maybe a mile. We continued until about 2pm and then headed back. The first part of the hike had some steep uphills and were weren't really feeling like dealing with that on the way down (plus potentially wet rocks as it did rain for a while, but the forest blocked most of it for us). So we followed the trail back until it intersected the Looyalsock Road (it did it 3 times, we took the last intersection) and followed the road back down, since that seemed safer to us. Towards the end, we reconnected with the High Rock Trail to save us a half-mile of back-tracking to the visitor center. We figure we hiked about 8 miles on a hike that was rated as "difficult." It was some steep climbs, but it was a pleasant area. We ran into a few people, but went more than an hour between seeing people. The sky overcast and the trees weren't at peak colors, so I didn't take many pictures. Deepak had his camera equipment with him, but only took a few cell phone pictures. Also, the trails were very well marked. It never took us very long to spot the next trail blaze (marker). My legs were tired and calf muscles were hurting after the hike. On the way home, we stopped at the Forksville Covered Bridge which crosses the Loyalsock Creek off of Route 154. After that, while on route 87 back to Williamsport, I spotted a bear just beyond the guardrail to the right. I turned around at the next opportunity and backtracked, slowly approaching the place at 30 mph or less. Sure enough we saw a young black bear, the size of a large dog (basically the perfectly huggable size), sitting on top of the guard rail. The car was still maybe 50 meters or so away and we see it tumble down, only to catch himself so he was now hanging from the guardrail by his paws and claws, maybe a foot off the ground. A moment later he plops down onto the ground, looking adorably cute, even from that distance. Deepak has his phone out, ready to get a picture (we are not going to get out of the car—we're not that dumb). But just before he can take the picture, I see an ambulance in the distance, it's lights blazing, approaching us. It's the same ambulence that had passed us twice already, coming and going. It blows by the bear at high speed and the bear does not like that bright, flashy, noisy, scary thing that came within 5 or so feet of it, so it quickly disappears back into a field beyond the guardrail. And we have no photographic evidence. The bear incident kind of summarizes the whole trip. It has potential. Nothing bad happened. But we were hoping and expecting better things. We had dinner in Williamsport, watched a Star Trek movie at the hotel (we are geeks), and then on Sunday morning we left after breakfast. It was a fun place, but still not firing on all cylinders. We'll have to try again I suppose. Below are a handful of pictures from the vista, trail, creek, and bridge. 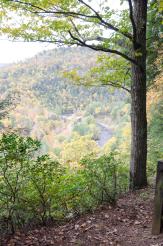 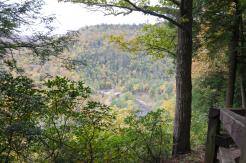 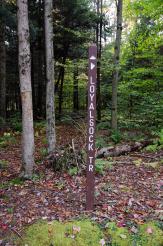 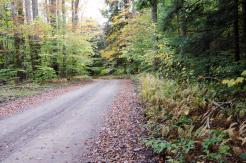 The Loyalsock Road, which the trail crosses a number of times. 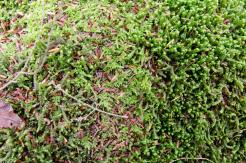 A close-up of some mossy stuff. 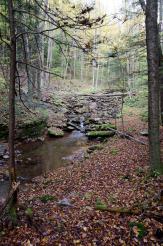 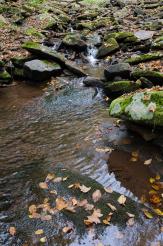 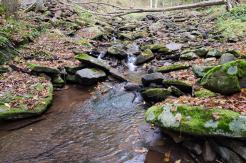 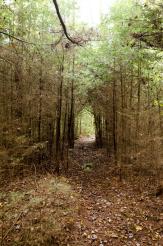 A kind of creepy tunnel in the woods, almost fairy-like. 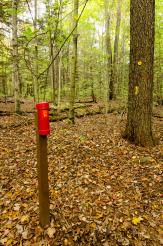 An incredibly red cylinder where hikers can sign-in and out. 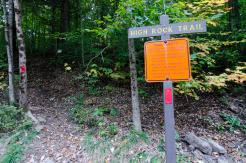 The sign at the start of the High Rock Trail, as we exited it. It's very true...(more) 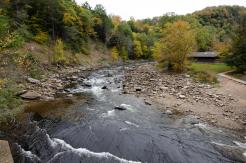 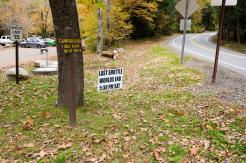 A county fair was also happening and I think they used this parking lot for the...(more) 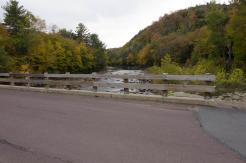 Bridge over the Loyalsock Creek. 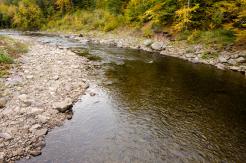 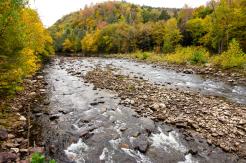 Localsock Creek with some fall colors on some trees. 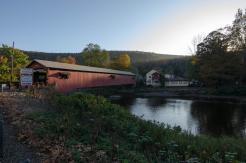 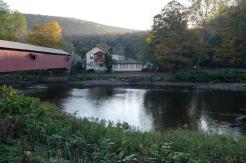 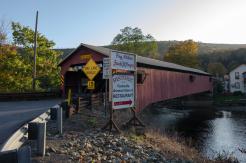 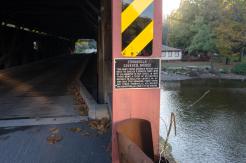 Information on the Forksville Covered Bridge. 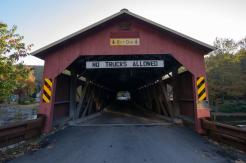 Looking into the Forksville Covered Bridge.