I learned that Chris was a pilot and had even owned his own airplane. Of course we talked about lots of airplane stuff and I mentioned my intention to rent a plane and instructor and fly when back in Cambridge (for various reasons, I wound up not doing that). I said I'd enjoy being able to take a look at a small UK airfield.

Chris had been a member of the (I believe) Baxby Aerosport Club, but had not been active there for a few years. The Bagby Airfield was similar to Baxby, but in the opposite direction, which was closer to other places were were planning to visit that day. So, one of the first stops on Sunday then became Bagby Airfield (EGNG), a small grass strip airport.

Aside: the suffix -by comes from Old Norse meaning farmstead or or settlement, and the first part is the proper name of the person, i.e., Viking, who's farm was there. This is characteristic of town names in northern England, which was the Viking's bitch in the 8-10th centuries. Similarly, the town name Thirsk, for example, sounds fairly Norse and comes from the word for fen (marshy or flooded area) or lake in Old Norse. Sounds very different from the little town of Rievaulx nearby (it's name comes from Old French for the [river] Rye valley).

The airfield has a small restaurant/coffee shop, and a few people were having breakfast there. It was a foggy morning and while I'm not sure of the exactly ceiling and visibility, I'm pretty sure it was IFR (instrument flight rules, which means no visual flying), and since small fields generally don't have instrument approaches to their runways, nothing would be flying. Chris wanted to talk to someone there to see if we could take a look around at some of the planes. We talked to the person running the restaurant grill. Turns out he had taken a summer blacksmith workshop from Chris a few years ago while in high school (or the British equivalent...there's only so much cultural stuff I'll spend time looking up and cross referencing). He said he'd be happy to show us around the hangars once he got the breakfast orders finished.

So we got to see the different sorts of planes at the Bagby Airfield, which was fun, even though not much was happening at the field beyond breakfast. One other note: it appears that the airfield and the town of Bagby have had a history of not getting along. The airport promolgates notices that planes are stricly required to avoid overflying the town to avoid noise issues. It sounds like the people in the town don't care and hate the airport, or at least a few vocal people hate the airport and have been trying to do their best to cause problems (like require the airport (to have to pay) to reduce the size of the runway by 90 cm (really!) but that got struct down when reviewed). When I've flown in England before, I had been told that often local people have antagonistic attitudes towards airports, and the pilots need to be very cautious about where they fly, especially for activities involving flight training. It happens a little in the US, but usually it's just greed (people want the land to build houses and businesses) rather than quality of life issues (noisy planes) that motivates the conflicts. 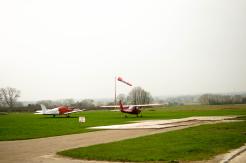 Planes tied-down at Bagby Airfield on a hazy morning. I don't know why CYMA...(more) 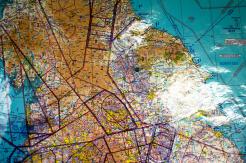 A UK aviation chart mounted on the wall. Bagby is marked with a green...(more) 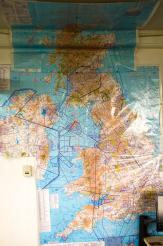 A picture of the full chart on the wall (sorry about the blown out areas on...(more) 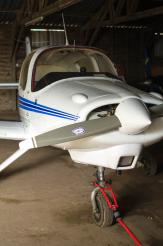 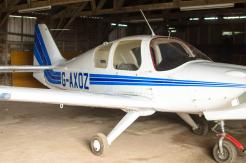 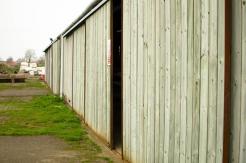 Outside of the second hangar. 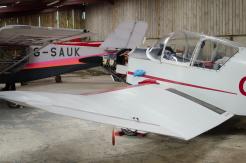 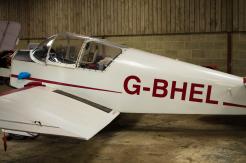 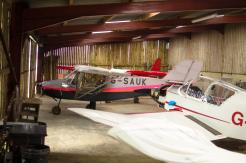 Rans S-6ES Coyote II, a US deisgn, which can be kit-built or purchased as a...(more) 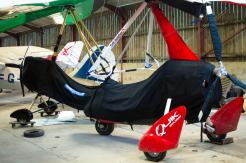 Some microlights, which are similar to ultra-light planes. 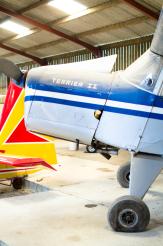 A Beagle A-61 Terrier 2, a British production plane. 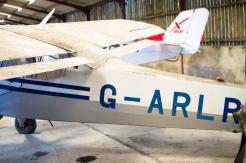 It hasn't been flown in a while (flat tires and dust). 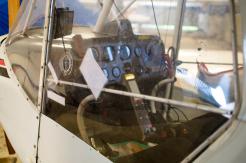 Cockpit for an X-Air Light Sport category plane (not to be confused with an...(more) 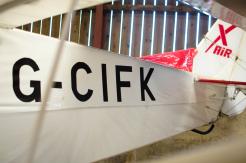 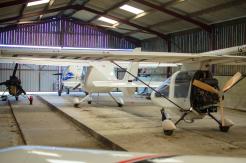 A number of other light planes in the hangar. The plane in the back that looks...(more) 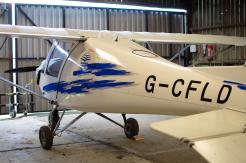 The one is an Ikarus C42, 2-seat, German-made microlight plane. This was the...(more)